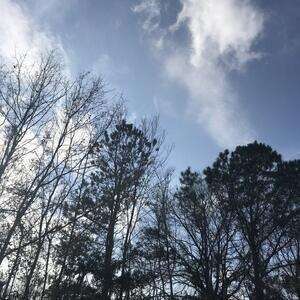 Migraine has subsided a bit.
I’m outside.

These days happen from time to time.

If I were up north, it would seem like

summer leaning into fall, a breeze to blow in winter from the sea.

But there’s no winter in its warmth.

coming out of an oven.

A day for a sail,

a walk in the changing gold and

It’s the kind of day and temperature

that warms your skin

so you smell the hint of bandaids that don’t keep on your knees.

January in North Carolina bringing back Augusts in Connecticut

with roller skates and bicycles

and the anticipation of school starting soon.

That last escape before routines,

several states, and two seasons away.

I would look up toward the sun and clouds,

but the migraine still

A villain, knife at my eye,

daring me to live.

I want to drop the rumination of past,

move forward into this new year.

But here I am, keeping my eyes to the ground,

hostage to thoughts instead of action. 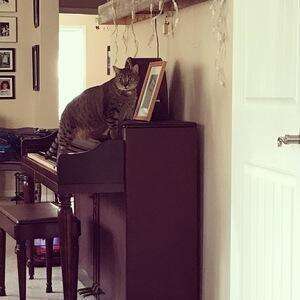 It's been a little while. I did finish the story for the anthology deadline with revisions, and I'm pretty happy with it. Then I had writer's block by a few contributing factors, and my ten year old daughter got bit by the writing bug for fanfic of a series she's reading. For at least a decade, 10 year old girls have gone crazy for the Warrior series. It's a Nancy Drew prolific series of series, but a Watership Down of cats, plot-wise. I was a bit envious of how easily the creative process came for her.

Last week, one of the block factors began to crack, and this poem happened. I've given a bit of spit and polish to it, and I'm a little more pleased than with the stream of conscious version that poured out of the crack. People who have seen the SOC version seem to like it. Even after revision, I think it still needs a little more musicality. In my experience, if my gut is telling me to put it out there no matter what doubts I may have, it's time to throw it out on stage with jazz hands. So here it is, enjoy:

Ghosts in the Piano

In the end,
We were given a piano
from the widower
of a piano teacher.
We showed up ready to buy it
but he refused when he heard my mother played,
And my sons play, and my daughter wants to play.
His wife had passed away around the same time.
He couldn’t bear to keep it in the house.

He stored it at neighbors who agreed to sell it for him.
The woman told me stories of her gentle friend
teaching students with autism,
and declared that she and my mother must have
put their heads together in heaven to put us together.
The widower refused to take our money.

The old Wurlitzer has been in our house for months now,
I’m just getting around to cleaning it.
The smell of piano wire and old wood,
dust, ivory, and leather have been
filling our house.
Stickers label the keys worn most from middle C to the least -
out the keyboard, the end keys still mostly legible and white.
I’ve been wanting to peel them off.
I’m peeling them off,
the clean ones are easiest to lift.
The left hand middle G is worn straight through.
Its ink-stained ivory tells me the stories of thousands of fingers who have played.
Some dancing, some plodding until hopefully,
they danced.

My mother’s ghost is happy to hear me bang on it.
I was never good at lessons, but would slowly
teach myself songs I liked, or I’d sit,
a melancholic kid who picked and poked at minor progressions
when bored, then banged on the keys, not unlike Mom’s tarantellas and boogies,
but maybe tunelessly moody.

Now I listen to my children the way she may have listened to us
from other rooms.
One plays the same song over and over,
little another makes stuff up.
The first who visits now and then
just plays what he writes on the fly.
Is that a song by someone else, yours, or are you just noodling?
Just noodling, but there’s a little something to work with.
If I talk, he stops and walks away,
like I did when she talked to me.

As I clean it now, swiping a paper towel with a gentle cleaner along the keys,
I hear myself cleaning Mom’s baby grand,
I hear the echoes of her boogies and tarantellas.
I hear the old teacher in the smell of the piano wires, old wood,
leather, and ivory, and
ghosts of my grandmothers, and all of her students,
my cousins banging on my grandmother’s,
as the ghosts of the thousand sticky fingers are washed off each key.
Finally, I play, awkwardly, never very good,
and the ghosts around me dance.

Be good to yourself and have an extra helping of pie on Thursday.