To puppy or not to puppy and writing 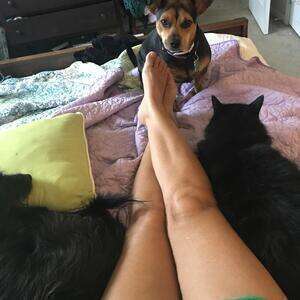 Pants not required for writing when one has pets.

After much hilarity and drama, it appears that Sunni-D has done the 11% percent thing and pulled a “canine fetal re-absorption” move. Google it, it’s wild. We were actually looking forward to and preparing for puppies, and I had four takers to adopt among friends. Alas, puppies were not to be, but spaying is imminent.

Meanwhile, school started for kid, and we attended two weddings far afield in the beginning of October, from which I am still recovering. I’m not sure how much I have spoken here about Ehlers-Danlos Syndrome, but it affects a lot, and writing is affected when I over do it. The travels were worth it, but I’m just now slowly getting my brain back.

I have finally figured out in my recovery from above, that over the last handful of years, as I abandoned a handful of larger projects, I side wrote several short monster stories of feminism, social norms turned inside out. You know, when men and women interact, then things go sideways into other realms.

My current project is editing and finishing those into a collection. I’m assuming at the moment that I will self-publish, unless something comes up, submissions these would fit.

I hope you’re enjoying your fall, and that you are safe and well with all that is going on in the world.

Thanks for stopping by.