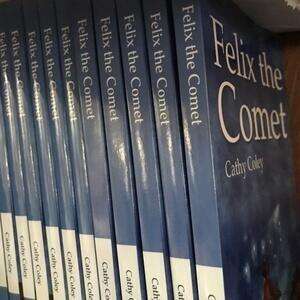 This could belong to you, a teacher's classroom, or a child you know!

I have one kid left going into school this fall. Fall is a relative term here, as she is starting in August, and the Equinox isn't for another month. I don't know if this is a particularly southern thing, or farming thing. When I grew up in Connecticut, we always started after Labor Day, and that made much more sense to say Fall, at least it was the same month in name. My boys did so, too, in our Massachusetts days.

This is neither here nor there, except to say life moves on, and I get caught in the current, no matter my good intentions to write daily. May that be more possible once the house is a bit quieter. I'm crossing my fingers and toes. I have also opened up a few old manuscripts and started to poke around.

Thanks again to everyone who bought books I have on hand, signed and delivered. I still have about 15 left and to restate, I will happily sign and send them to you or a child or teacher for a classroom for the low price of $10 per book, to cover printing and shipping costs. I am making nothing on this. I am just clearing them out of my house, to make headroom to write anew. It's a fun tale of social negotiations of a 6th grader who loves science, his friends, family, and dog and runs into trouble with a new kid in town. Target audience is a good third grader reader up.

I still think of this time of year as the beginning, after my own school years and a couple of decades in education profession.

Happy turning of the season!